This year I decided not to join my team for the Tour de Pink. But then I got an email in Steve Moskowitz’s periodical cycling newsletters that the TdP needed SAG wagons.

Side pause. For you non-cyclers out there, a SAG wagon is the support car that drives around helping cyclists that are having mechanical or physical problems.

I figure I do so many rides, but never offer to volunteer that now it was time. And it would be a good change to go to a ride and not ride. I’m always up for a change. I got to get up well before dawn and drive the 1hr trip over to Prairie View A&M. But when that sun came up…man. I tried to get a good shot, but didn’t stop my car soon enough to capture the best scene. This is the best I could do. 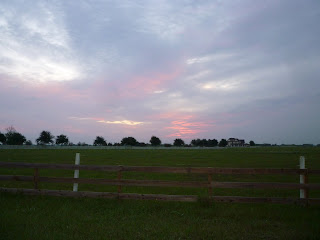 Anyway it was good because my company hosts a rest stop every year, and so I requested to be on that route and got to hang with some buddies I haven’t seen in a while and meet some new folks. My SAG was route was pretty uneventful. I guess cause it was on a route where you would expect to see experienced riders. I was pretty much a traveling tire pump. But that’s OK. I heard that other routes had a lot of action, so maybe I will ask for routes that travel the shorter distances? Also I think there were a lot more volunteers than expected, so there might have been one or two extra SAGs that weren’t needed. Sometimes you can have too much support. There were plenty of people encroaching on my territory, and I bet that helped with my boredom.

Oh well. Next ride I will definitely be on my bike.