Sweet. I do have to say this year’s MS 150 was sweet. The first day started out with clouds a little bit of rain, but most importantly a tail wind. I breezed through the first 20 milesto the first Accenture rest stop in a little over an hour. Awesome.

After that Andy and I caught an ExxonMobil paceline and we took off flying. We were probably going 25-27mph. holy hell. I couldn’t stop my heart from beating like crazy, but I also couldn’t stop smiling. That was amazing.

If you’re not familiar with pacelines, here’s how they work. I usually average 15 mph on my bike by myself. So you can imagine how fast you can go when all the wind resistance is eliminated.

Unfortunately I could only keep up for about half an hour or so. Andy took off with them, but my heart couldn’t keep it up. So they flew away and I made it to lunch around 10 or so. Saw Alex, saw Raza, Dan, John, Fabrice and a Matt. The rest of the day went ok, jumping on and off people’s wheels. There were more rolling hills than I expected. I lost of a lot of other people, so spent most of the ride by myself. Eventually I caught up to a group about 30 miles out of La Grange, so that was nice. I would have like to have the chance to really get to know my team better. Then we could have ridden together, but at the time it seemed like we were all at different speeds.

Got into La Grange around 3pm I think. Don’t remember. I do remember that it took me about 6hrs on the bike to get through 95 miles. Pretty good. When I do a century, hopefully I can get a better time.

In La Grange, hung out, met people, showered, ate a lot, slept as best I could. Next year I will bring games or something fun to pass the time.

Next morning 830am start. Decided to take the express route this year. Last year was just too much pain and I still have those chain ring scars. Got through the first 30 miles pretty ok. Didn’t get to meet up Alex like planned because of my late start. Was about 25 mins behind the guys and my front derailleur was giving me problems. I had the Bike Barn guy check it out, but he was like, it’s fine…What?! then why can’t I shift right!? I dunno it worked 30% of the time, so I tried not to shift out of my big chain ring.

Anyway after that I was tired and ready to be done riding. It wasn’t fun anymore and I couldn’t pin point my unhappiness. Got to the Accenture rest stop through a nice paceline cause the wind turned and was pushing us back. Picked up Ashley and we made it there fine. Saw Theresa and Candy. At the stop we met Danny and John. Decided to leave the stop and make the rest of the way together. ACCENTURE PACELINE! That was amazing! I was so happy. No wind, I could rest up my legs. Got some Guu gel in my system and we were flying. 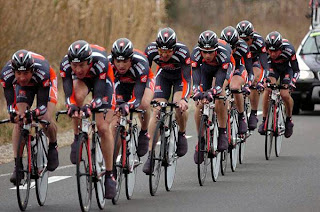 I think we were going 16-17mph in a 5-10mph head wind. Sweet. Why didn’t we do this before? That’s when I figured out what was missing from before. Why I was bored and tired and not caring.

I was missing friends. They made all the difference. Working hard together for one goal. I haven’t had that in a long time. That’s what this weekend needed more of.

I think we got through the last 20 miles in an hour and half. or something fast like that. At least it didn’t even seem like an hour cause we were having fun, picking up people along the way. First we saw Matt and then Jenna. We conquered the last of the hills together and all of a sudden we were rolling into the capital. We didn’t look quite like Caisse d’Epargne above, but I think we were close to it. Danny had a helmet cam so hopefully he got some cool vid of us.

Rolled in at around 245pm. Covered about 67 miles in a little less than 6 hrs. Whoop. Next year will be the challenge route and definitely more team pacelines. Laura asked me to take over co-captaining next year with Debra, so that will be fun and hopefully we’ll get a bigger team out next year. And we’ll all get in one big paceline.