As the MS 150 gets closer and closer, I am getting more an more anxious about getting my new bike. I really need something that fits me so that I can ride comfortably and well during the 180 miles. Here’s a quick time line of my Bike Saga:

And the waiting continues. I feel like it’s sucking the passion out of me. Once I started biking, I was pretty obsessed with the whole scene. I was riding every weekend. I did at least one charity ride a month, and even got into watching the big 3 tours. When my bike was stolen, I lost my appetite for 3 days and carried around tons of anxiety, couldn’t sleep, couldn’t focus. It was like I got dumped or my dog died. Seriously. I still am carrying that anxiety, even though I still have my Jamis, it’s not that fun to ride. It’s heavy and too long for my short stature. My friend Mark said it and I think it’s true, that I won’t be OK until I replace my Scott. So I tried. I’m still trying to replace it. But the world has not yet swung in my favor. My past few rides have not been so fun, so now I’m wondering if it will ever be fun again.

It’s like being in a relationship and wondering if you should break up.

I miss my Scott. 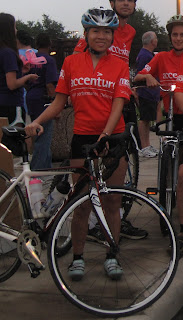