The hill isn’t in the way. It is the way. 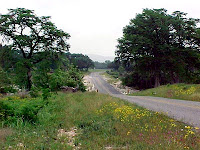 So today was another 5 am wake up to go ride. It was our first taste of rolling hills, and I had one of the best rides of my life. At first I was worried I wouldn’t be able to sustain 50 miles of hills, but they were actually a great change to all the flat, windy terrain we’ve been seeing. There was still wind, but it came in pockets since we sometimes had trees to block us. The hills weren’t too bad; I stayed in my big chain ring for most of the ride and tried to keep a strong pace. Total time 4.5 hrs – 50 miles. Total time on bike ~3.75 hrs. Bike computer said 13.6 mph avg. Pretty good. I feel better that I know I’ve improved since last yr. I was probably averaging 10 mph on rides about this time last yr. The scenery was great. Calming, clear, fresh.

Made a new friend, Leigh to carpool with. Dan came this time, so it was nice to have people to pass the time with. Hung out with Theresa and John a little more. Fixed a flat. Drove really far. haha. Ate a lot of chex mix.

Got home and was pretty beat, ate chili, tried to sleep, but was having a hard time. When I finally fell asleep I would wake up and feel crappy, roll over and try to sleep again. This continued for 2 hrs until I just got up. Felt like I had a headache…probably from dehydration. I don’t like to drink a lot on rides. So chugged down lots of water and tried to feel better. Food helped.

Pretty tired now, still have a headache…would I be lame if I went to bed right now?