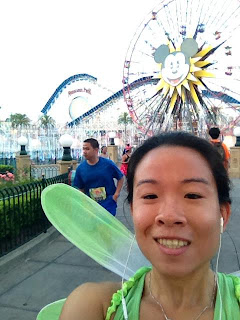 Disneyland! Sunday morning I crawled out of bed at 4am to run the Disneyland Half with my cousin Jimmy and friend Linh. I dressed up as Tink and Linh was Snow White. Jimmy was amused but did not feel left out. Haha. Except for having to wake up crazy early the race was probably the most fun you could have while running 13 miles. The first 3 miles were through Disney and California Adventures. It was my first time there so it was pretty magical. There is nothing like it. I can’t describe it, you kind of have to be there.

I tried to get as many photos with characters as possible, without having to wait to long or waste too much time. I got a picture with Hook, but didn’t see my fav princess, Ariel. Oh well next time maybe. I wish the run hadn’t been so crowded. 27,000 people did the run. But I guess that’s what you get when you want to run inside the most magical place on Earth.

I thought I would hang up my running shoes after this, but maybe not. I feel pretty ok today and it was a pretty cool run. Who knows, I guess I won’t rule out the idea if it comes up again. But no more full marathons. Hellz to the no.