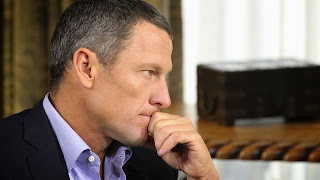 You only need to say Lance and my brain automatically thinks of Lance Armstrong. His wins took place before I started to love cycling, but I watched his come-back in 2009 and 2010. He was a contender. Drugs or no drugs that man is an athlete.

Betrayed is how many people feel. They were lied to repeatedly and their loyalty was shit on. Me? I feel like people should embrace the imperfection. I think that we are finally seeing the truth that lies behind most cyclists. Every year multiple professionals are caught doping and many titles have been stripped, not just Lance’s. We are focused on Lance because he is one of the few Americans to have made it in the sport and because he won so many times. But if you look around you many of the GC men have been found guilty of doping at one point in their career and have come back to cycling: Contador, Basso, Vinokourov, Leipheimer, Andreu, Di Luca, and Frank Schleck to name a few. Even the legendary Eddy Merckx tested positive for illegal substances. Take a look for yourself. When you’re caught you receive a ban which is usually 2 years. Just 2 years (not life) because USADA recognizes the fact that people can change and come back clean.

Should USADA hold to the life time ban? I don’t think so. I don’t think he’s the only one to blame for the events and there are certainly some controversies within USADA not addressed.

Doping has been a prominent part of cycling since the beginning of the Tour de France and it will continue to plague the sport. I think that as fans we can only know that it is there and watch cautiously and without judgement.

I also think we are seeing what is true for every man. Vices, demons, mistakes, flaws; whatever you call them we are all carrying wrongs against another person, group, organization, etc. I definitely have my share of lies, mean words, purposeful neglect, and selfishness. I think America does a good job of creating false heroes and unrealistic ideals. America could do a better job of embracing mistakes and realizing unhappy endings. Right now Lance is a prime example of the fact that unhappy endings are real. We make wrong choices without thinking them wrong and they have consequences. He is facing his demons and his shame just like the rest of us.