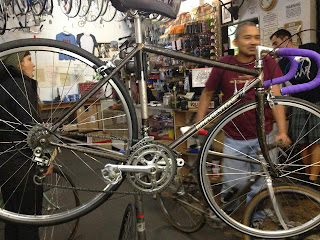 I have a new friend! If you don’t know, I volunteer at a bike co-op called Bikerowave. So I had been keeping my eye out for a frame that would be my size so I could build a beater bike. In August a 1980s Bridgestone walked in and I claimed it!

I spent the last two months at Bikerowave building up this bike. First I needed a narrow hub, for the rear dropouts so I had to build a wheel that had such hub. This took about 1.5 months because I did it all wrong about 5 times. Never build a wheel. There is a reason why these things are done by machines these days. I’m not going relive the frustration that was wheel building, but I’m glad I got it done. The rest of the month was just spent digging through used parts bins around the shop and finding time outside of my regular shift to work on it. Luckily things have been slow so I was able to get some stand time in on Mondays when I volunteer.

Nothing matches. If you look closely, the cranks are different colors. My brake shifters are both left shifters and the pedals don’t match. My brakes are different. So I have named my bike Frankenstein. In honor of the month it was born and the way I put it together. The initial strategy was to just get it functional so I wouldn’t have to pay for gas anymore, and later I could change and improve stuff. But I kind of like it this way. I think I’ll just leave everything as is except maybe make stuff more comfortable.